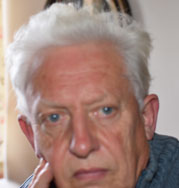 Hedley was born in Mauritius of English parents and came to England when he was only a few months old. Raised by Storm Kelpies in Sussex he spent the first thirty years living around Haywards Heath and Lewes and then moved to Suffolk in 1989 to escape from the goblins, elves and deer-flies of Sussex, where he now lives with his wife and two dogs at The Erasmus Foundation, a Spiritual Teaching and Healing Centre, acting as a volunteer and trustee of the charity.

His two children and six grandchildren were brought up on the Ashdown Forest by fairies in Sussex.

Having started his career animating some of the films on the Mr. Men series he spent 30 years as an animation director, much of this time working for BBC and Channel 4 Schools Television. Hedley now self-publishes his own children's books on child safety. Some of the BBC programmes he worked on included "On The Road", "The Worm That Turned", "Vision On", "You and Me", "Words and Pictures", "Words and Pictures Plus", "Writing and Pictures", "Storytime", "Le Club - Les Aventures de Globo", and "Watch". Channel 4 credits include "Maths Mansion", "Rat-a-Tat-Tat", "Word Machine", and "Arts Cart". Hedley Griffin Films

In 2003 Hedley started DangerSpot Books Ltd, writing , illustrating and self-publishing a range of child safety books, covering topics such as Road Safety, trips and falls, fire safety, farm dangers, stranger dangers, and much more. The series includes 17 titles with more planned and one has been sold in Holland, two in Hungary, and all titles in China.

In addition to publishing his own books he also provides animation, story writing and cartoon drawing workshops in primary schools around East Anglia. For further information about school workshops see Hedley Griffin Films — Artists in Schools

Other books by the author are: